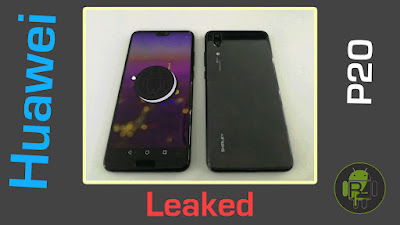 The Much Awaited Huawei’s Upcoming P20 series was not unveiled in the MWC 2018. It will be launched On March 27 in an event organized in Paris. Notable Tipster Evan Blass @evleaks has shared an image stating it as Huawei P20. Instead of rumored triple camera setup the smartphone sports a dual camera setup. Another alleged render of Huawei P20 and P20 Plus reveals the triple camera setup on the back which is shared by Slashleaks.
The render shared by Evan Blass may be the lite of the version of P20. A notch on the top of the display is featured similar to that of iPhone X is seen on the smartphone. The display sports an 18:9 aspect ratio with fingerprint sensor at the bottom. It features a glass back with led flash and Stacked Dual Camera Setup.
As per Slashleaks render the rear glass panel is featured with Stacked Triple Camera Setup and LED flash.