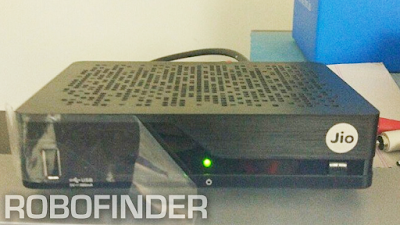 Telecom Giant Reliance has been working on DTH space with its set-top box hosting Internet Protocol TV capabilities after taking the telecom industry in India by storm with its affordable Jio 4G services and LYF smartphones. It Seems that the product is ready to launch within few months. A set of photos have surfaced online which allegedly show Jio’s Upcoming Set Top Box. The images leaked online shared by Candytech show a blue-colored retail box with the Reliance Jio branding. The rest of the images show the set-top-box from different angles, including the various ports at the back. The Ports include  standard cable connector, HDMI, USB, and audio, video output, along with an Ethernet port which can allow user to connect their broadband cable to the STB. It is also expected to offer live TV streaming, along with 350 channels with at least 50 HD channels and also with UHD or 4K support respectively.
Tweet Pin It