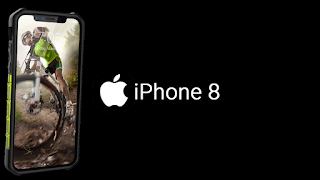 A recent leak has given a good idea about the Apple’s Next Flagship iPhone 8 smartphone which makes its debut next month. Noted Leaker Evan Class has posted a render on twitter. The render shows the I phone 8 with the the edge to edge OLED screen which will measure 5.8 inches across.The edges of the phone covered with the rugged neon yellow case much like Urban Armour Gear. The phone will have a notch for dual camera sensor and central ear piece on the top of the screen. In this iPhone what you’ll not see is the home button.Other rumored features include a crazy fast A11 processor and wireless charging.The iPhone 8 is expected to launch in September with the price of $1000 or more.