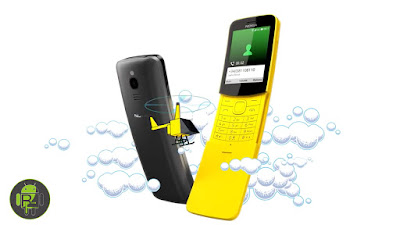 HMD Global which is resurrecting the Nokia Brand is introducing Nokia 8110 the updated version of the 20-year-old phone. The slider phone which was launched in 1996 and also used in 1996 Sci-fi movie The Matrix in the iconic scene ” Guns. Lots of Guns”.
The phone features the iconic curved design with the banana yellow color option and also the traditional black color option. The smartphone sports a slide down cover offering the feeling of answering or ending the voice call.
The black and white screen is upgraded to 2.4 inches (320×240 ) color screen curved display which runs the same visual interface as that of Nokia 3310.
Even if the screen is small for some tasks you can use the smartphone as a wireless hotspot by tethering it with smartphone or tablet.
The Nokia 8110 runs on Snapdragon 205 chipset. As the name suggests yes there is 4G LTE connectivity for voice calls. The battery is of 1500 mAH which will last over 9 hours for VoLTE calls. The smartphone will be available in Single and dual micro sim options.
The Nokia 8110 runs on Smart Feature OS and not on Android but it has an app store with Facebook and many other popular apps. You can also import  Gmail and Outlook contacts and access the email account.
This durable low-cost smartphone has 2-megapixel rear camera but there is no front camera for a selfie. The Nokia 8110 has 512 RAM with 4 GB internal storage.
The Nokia 8110 4G smartphone will be available around May for around 79 euros though the exact pricing is yet to be announced.