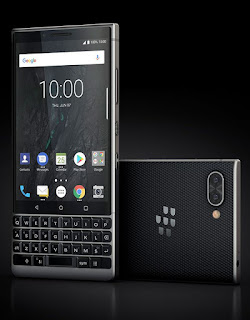 Blackberry announced last month about its new BlackBerry  Key 2 which  will be unveiled on June 7 at event in New York but ahead of its launch Mobile Reporter  Evan Blass has posted a leaked press render of new BlackBerry  Key 2.
As per the leaked specifications sheet the BlackBerry  Key 2 will run on Qualcomm Snapdragon 660  Processor with 6 GB Ram on Android 8.1 Oreo OS. It will sport 4.5 inch IPS display with 1620 x 1080 mega pixels resolution. The  Key 2 features 12 Mega-Pixel Rear Camera and 8 Mega-Pixel front camera.
The BlackBerry Key 2 will be available in two colours: all-black and black with silver edges.
Tweet Pin It