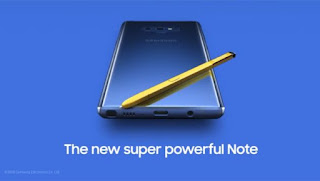 (Image screenshot from YouTube)
The video of the Samsung’s Upcoming flagship Samsung Galaxy Note 9 of blue colored variant with yellow colored stylus was first spotted by Sammobile and is still available on YouTube. The video talks about the 4000 mAH powerful all day battery, 512 GB on board storage and 1 TB micro-SD Slot. The video clearly shows the dual rear camera setup placed horizontally.
As per reports the Samsung Galaxy Note 9 will be available for Sale earlier than expected. Flipkart has already made the page live on its platform for the smartphone in India.
Let’s Wait till 9thAugust to see more surprising features of Samsung Galaxy Note 9 from Samsung.
Tweet Pin It